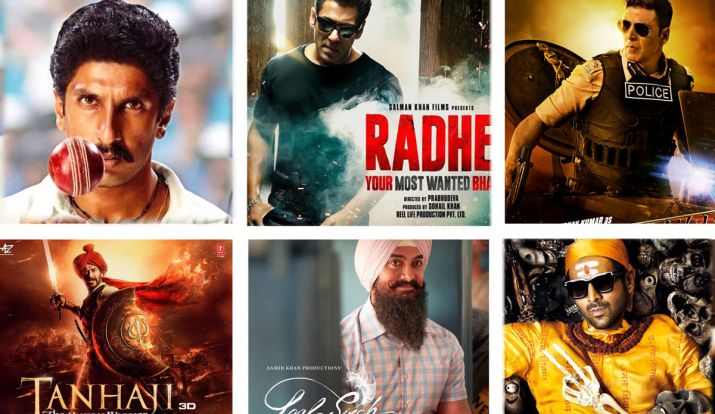 The year 2020 starts with some great and historic movie and the year will be ending with the biography movie in December 2020. Nowadays the Bollywood industry is producing more than 200 films in a year with the Box Office Collection of more than Rs.5000 Cr. In fact, the Bollywood industry has started to release the move in multiple languages so increase the collection and fan following. In the below-mentioned article, you will get the details about Top 10 Bollywood Movies Releasing in 2020.

In the top 10 list for the year 2020, the first Bollywood movie is Tanhaji The Unsung Warrior which is directed by Om Raut. The movie follows the real-life freedom fighter Tanhaji who is working under The great Shivaji Maharaj. Tanhaji The Unsung Warrior movie is made with the total budget of Rs.150 Cr against that collected Rs.360 Cr Worldwide. In fact, the film is considered the first Blockbuster Bollywood Movie for the year 2020. Ajay Devgn and Saif Ali Khan are appraised by the audience and critics.

Tanhaji The Unsung Warrior movie has songs but they are not listed in top charts. In fact, the movie has received 8.3/10 by IMDb users and it is rated by 14467 users. We can expect that the movie will get awards for the actor’s performance and story.

Baaghi 3 movie is the third installment for the Baaghi services which is directed by Ahmed Khan. In Baaghi 3 Roonie is finding his brother who got kidnapped by the Terrorist in Syria. The film is made with a budget of Rs.100 Cr and expected to collect more than Rs.300 at Box Office Collection. After the success of War movie the Tiger’s fan waiting for his movie to watch him again on Big Screens in Action. Baaghi 3 movie is released on 6th March 2020 and collected Rs.27 Cr on its first day.

The much-awaited movie from Akshay Kumar’s career for the year 2020 is Sooryavanshi. Akshay Kumar and Katrina Kaif making their comeback on the big screen after a long time. Sooryavanshi movie is directed by Rohit Shetty and it will be a continuation for Cop Series movie just like Singham and Simmba. The movie is made with a total budget of Rs.150 Cr approx. and expected to collect more than Rs.350 Cr at Worldwide Box Office. Also, with Sooryavanshi movie the multiplex will be open for 24/7 in Mumbai and the movie is releasing on 24th March 2020 in Evening. In Sooryavanshi movie you will see the remake version of Blockbuster Song Tip Tip Barsa Paani. Rohit Shetty has announced the Sooryavanshi film in the climax of Simmba movie and fans are waiting to watch the movie.

Sooryavanshi movie is published by the Reliance Entertainment on 2nd March 2020. In fact, Sooryavanshi movie trailer is viewed more than 70 million on Youtube in just 5 days which is highest for Bollywood movies.

Kabir Khan’s Latest Film 83 will gives the memory of the 1983 World Cup Win by Indian Cricket Team. Ranveer Singh is playing the role of Indian Captain Kapil Dev and Deepika Padukone is playing the role of Kapil Dev’s Wide in the movie. The principle of photography starts in the year 2018 and Kabir Khan has announced the movie to media. The first look of 83 movie is published by the Kamaal Hassan and Ranveer Singh on their Social Media Account. The 83 movie is getting released on 10th April 2020 which is made with total budget of Rs.125 Cr approx.

Laxmmi Bomb is a Horror Comedy film which is a remake of Tamil Blockbuster movie Kanchana. Raghav Lawrence is the director of the movie who is Lead Actor for the Tamil version original title Kanchana. Laxmmi Bomb movie is getting released on 22nd May 2020 and this will be Akshay Kumar’s 2nd movie after Sooryavanshi in the year 2020. The total budget for the Laxmmi Bomb movie is Rs.100 Cr approx. and Kiara Advani playing the opposite to Akshay Kumar in the film. The movie will earn more than Rs.250 Cr at Box Office if we compare Akshay Kumar’s Last 3 Films Mission Mangal Rs.300 Cr, Good Newwz Rs.315 Cr, and Kesari Rs.150 Cr.

Akshay Kumar has shared the Laxmmi Bomb First Look Poster through his social medial account on the occasion of Navratri Festival 3rd October 2019.

Navratri is about bowing to the inner goddess and celebrating your limitless strength.On this auspicious occasion,I am sharing with you my look as Laxmmi.A character I am both excited and nervous about… but then life begins at the end of our comfort zone…isn’t it? #LaxmmiBomb pic.twitter.com/TmL9U1OXdk

On the occasion of Eid in 2020 Salman Khan is making his comeback to Bollywood after his last film Dabangg 3 movie in December 2019. In fact, Salman Khan will face competition this year in Eid with Akshay Kumar’s Lazmmi Bomb on 22nd May 2020. The total budget of the movie is around Rs.150 Cr but the final amount is not yet finalized by the team. Radhe movie trailer is expected to release in April 2020 2nd week. The film was announced by the Salman Khan in the early days of January 2020 and we have received the motion poster of Radhe movie with the tagline The Most Wanted Bhai

After a long period of time, Ranbir Kapoor is making his comeback in Shamshera against Sanjay Dutt. The Upcoming Bollywood movie Shamshera is an Action film which is directed by Aditya Chopra under the production banner of Yash Raj Films. The movie will get released on 31st July 2020 and shooting is about to complete by April 2020. In fact, we can expect that the production will release the trailer in June 2020 and soon we will get the final date for Trailer release. The movie is made with a total budget of Rs.120 Cr approx.

Prithviraj is the 3rd Movie for Akshay Kumar in the year 2020. The movie is directed by Chandraprakash Dwivedi under the production banner of Yash Raj Films. The film Prithviraj will get released on 13th November 2020. Akshay Kumar is portraying the role of Prithviraj Chauhan who fought for India against the Mughal to save the country.

Brahmastra is an upcoming Bollywood Mythology in 2020 getting released on 4th December 2020. Ranbir Kapoor, Amitabh Bachchan, Alia Bhatt, and Mouni Roy have played the lead role in the movie.  The film Brahmastra is directed by Ayan Mukerji made under the production banner of Dharma Productions & Fox Star Studios. As per the current report, Amitabh Bachchan has completed the shooting for the film in the month of March 2020.

As we all know that Aamir Khan is known to release the film at Christmas and again in 2020 he is coming back to Bollywood with Laal Singh Chaddha movie. The movie is directed by Advait Chandan under the production banner of Viacom18 Motion Pictures, Aamir Khan Productions. The movie is based on American Drama Forest Dump published in the year of 1994. In Laal Singh Chaddha movie Tamil Superstar Vijay Sethupathi in Bollywood movie and the film is getting released on 25th December 2020.